Morati is a regular verb and belongs to A group of verbs so it’s conjugated regularly. It’s used to talk about obligation. It means must, have to, or need to.

When negated, this verb actually means that you have a choice, you don’t have to. It doesn’t mean mustn’t.

Moći is an irregular verb. We use it to express the possibility, what we can do if we want. With this verb, we talk about our ability, capability, or circumstances that allow us to do something. 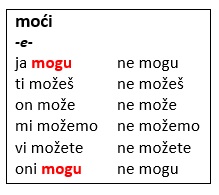 Negated, it shoes impossibility, what we’re unable to do.

We can also express forbiddance and that’s very typical for children and parents. 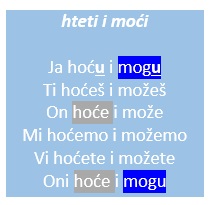 We use „Ne mogu“ for refusing an offer politely, for example:

Moći is an irregular verb, but it belongs to the E group. It’s very simillar to the verb hteti. They both end in -U in the first person singular in the present tense: ja hoću i mogu (I want and I can).

These are the only two verbs in the Serbian language that end in -U in the first person singular.

Moći has the same forms for the first person singular and for the third person plural, ja mogu i oni mogu (I can and they can). The other forms are regular, just the stem changes slightly. It has a regular negation: simply put ne before the verb.

If we say, „Sanja može da ide u bioskop večeras“ (Sanja can go to the cinema tonight) that’s a possibility: she can if she wants to.

If we say, „Sanja možda ide u bioskop večeras“ (Sanja perhaps goes to the cinema tonight), that’s probability. We don’t know if she’ll go or not, she may go. We’re not sure.

Možda (maybe, perhaps) is an expression that originated from može + da. It can be replaced with može biti, so it’s the same as maybe or can be, it’s possible.

Može means ’it can’. It’s third-person singular of the present tense of the verb moći. We also use this word as an expression meaning ok, alright.